Bladder cancer on a rise in India

Bladder cancer on a rise in India

Urinary bladder, the part involved in collection and storage of urine from the kidneys before disposal by urination is a very vital organ. In humans the bladder is a hollow muscular, and distensible (or elastic) organ and sits on the pelvic floor. Bladder cancer is an important ailment and according to the International Agency for Research on Cancer, it was the ninth most common malignancy worldwide and affected nearly 430,000 people. The incidence is high in people Southern and Western Europe, North America, as well in certain countries in Northern Africa or Western Asia. It is the fourth most common cancer in men and eighth most common malignancy in women in the Western world. In terms of death bladder cancer ranks 13th among all cancers, and while its rates are decreasing in the most developed countries, they are increasing in India. From age perspective, bladder cancer is very uncommon in the first three decades of life and peaks in people above the age of 60.

Risk factors: The major risk factors for bladder cancer include tobacco smoking, industrial exposure to potential carcinogens such as aromatic amines and carbon black dust, long-term drinking of arsenic-contaminated or chlorinated water, and family history of prostate, endometrial and bladder cancers. Many of these risk factors can be modified by lifestyle measures and environmental protective initiatives, implying a strong prospect for intervention. Studies from India have shown that bladder cancer was common among laborer and industry workers including employees of leather and textile factories, hair-dye handlers (barber), and shoe-makers. Reports suggest bladder cancer development is high in industrial workers and these people should be monitored continuously by regular surveillance.

Symptoms or signs: People with bladder cancer may experience the following symptoms or signs. Sometimes, people with bladder cancer do not have any of these changes. Or, the cause of a symptom may be a different medical condition that is not cancer.
1. Blood or blood clots in the urine
2. Pain or burning sensation during urination
3. Frequent urination
4. Feeling the need to urinate many times throughout the night
5. Feeling the need to urinate, but not being able to pass urine
6. Lower back pain on one side of the body

Diagnostic Investigations: Bladder cancer can be detected by urine examination, urine cytology for malignant cells and by ultrasound or CT scan. The confirmation test is the biopsy report where a piece obtained from surgery is sent to pathology to determine the grade and level of invasion of the tumor.

Bladder cancer in Mangalore: Dr Suresh Rao, Director of Mangalore Institute of Oncology expressed that when compared to the last century, the incidence of bladder cancer is on a rise in India and in Mangalore region. He also said that the best way to prevent bladder cancer is to not smoke and if you do to stop as tobacco products cause about half of all bladder cancer cases. The other is to drink lots of fluids because when a person urinates they get rid of the harmful chemicals that initiate and cause growth of cancer. To eat more fruits and vegetables that lowers the risk for many types of cancer. Follow all workplace safety rules and have a regular urine check if you are working in chemical industries known to cause bladder cancers and finally being observant to the color of urine and symptoms as if detected early, bladder cancer can be fully cured. 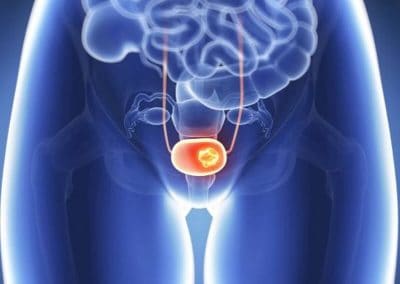